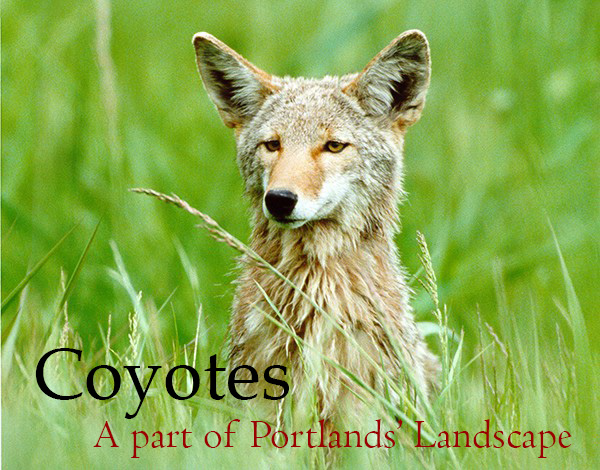 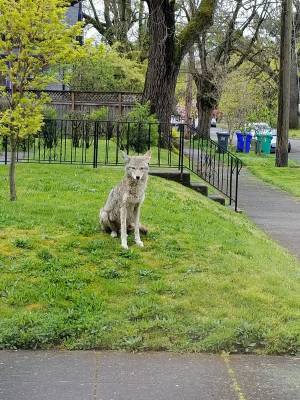 Photo taken 2 days ago in the Piedmont Community of NE Portland by John Brungart, Manager of Construction, Paradise Restored

Many of us going about our everyday lives in Portland never imagining coyotes are roaming neighborhoods in the Beaverton, Cedar Hills, Northeast, and Southeast areas of Portland. But apparently, they can live in a wide variety of habitats, including Portland’s backyards.

In January of this year, Lizzy Acker, The Oregonian/OregonLive, published an article on, “Are urban coyote sightings on the rise in the Portland Area?”  It quotes Zuriel Rasmussen, a PhD student at Portland State University who works with the Portland Urban Coyote Project as saying: “We’ve had over 2,000 sightings reported this year to our project, though these include the same coyote reported multiple times. I definitely do get a lot more reports of coyote sightings in the fall and winter months,” she told us. Urban coyotes are active in Portland from early fall through late spring which means, now is prime time for coyote sightings.

According to the Oregon Department of Fish and Wildlife:

Most of the time, coyotes are considered by some to be more of a nuisance than actually a threat. Prevention is always the best medicine when it comes to avoiding, minimizing or correcting problems with coyotes. By far the greatest number of conflicts between humans and coyotes are those in which the animal has become habituated to a residential area by the behavior of human beings. Nine times out of ten, these problems arise because people have attracted the coyote by giving it access to food or shelter. Giving a wild animal food is never a good idea. Fortunately, most of these situations are easily prevented or corrected by removing food sources and access to shelter.

Here are a few suggestions for minimizing the potential for conflicts with coyotes:

• Supervise pets when they are outside; if possible, keep them leashed

• Do not leave cats or small dogs out after dark

• Never leave food or water out for feral animals or wildlife

• Bring livestock and fowl into barns, sheds or coyote-proof enclosures at night

• Remove birdfeeders. Coyotes are attracted to them and the birds and rodents that use the feeder

Preparing for Coyote Sightings in Portland

Coyotes are an intelligent, adaptive species. While many other animals have experienced diminished ranges, coyotes have expanded their range across North America. Part of the reason for this expansion is that coyotes can live in a wide variety of habitats, including our own backyards. We ask that our community report all coyote sightings in the Portland metropolitan area. These reports help us learn more about how humans and coyotes interact in urban environments.

Who are we? We are a group of researchers at the Geography Department at Portland State University working in collaboration with Portland Audubon. https://www.portlandcoyote.com/ 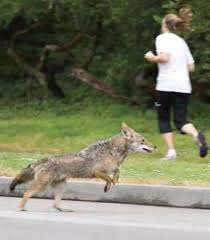 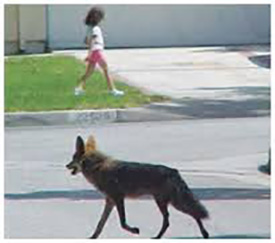 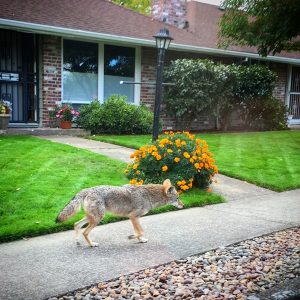 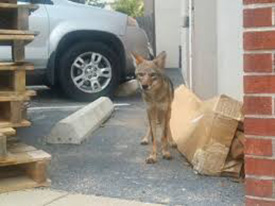 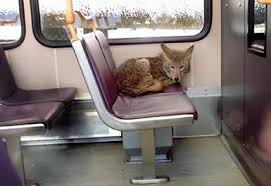 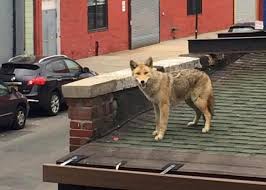 URBAN COYOTES – Thanks to the Audubon Society of Portland . . . 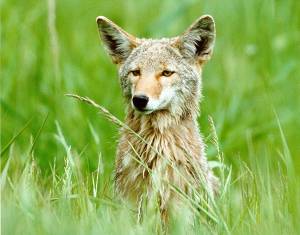 The presence of coyotes (Canis latrans) on urban and suburban landscapes is neither surprising nor necessarily cause for concern. Coyotes are highly adaptive members of the dog family and have demonstrated an ability to survive in the most urbanized environments in cities across North America. Most urban coyotes go about their lives without ever raising awareness of their presence among their human neighbors. Coyotes do, however, play an important role in maintaining healthy ecosystems. As a “top of the food chain” predator species, they play a valuable role in naturally controlling other species, such as rodents and Canada geese, that tend to proliferate in urban ecosystems.

Coyote management in urban ecosystems is sometimes driven by fear, misunderstanding, and sensational media coverage. Numerous myths about dangers associated with coyote activities have become established in the public’s mind as factual, and have been perpetuated as a result of repetition by media and the public at large. Ineffective or inappropriate coyote control activities often have not only failed to resolve existing conflicts, but may also have added additional unexpected hazards to the landscape. 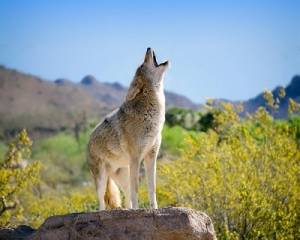 The coyote, charismatic cousin to the wolf, is one of America’s most controversial animals. Illusive, intelligent, with a chilling call, it is an icon of the Wild West. Native Indians were inspired by it, the white ranchers hated it.

Those of us in Portland who have an interest in finding out more about these visitors to our own backyards, or who would like to educate their children . . . may find this utube documentary interesting. Great story and background history. For additional in the series:

When John Brungart, Manager of Construction, sent Micah Dennis, CEO, three photos he took of a coyote from his truck on Monday, Micah emailed me a request for a quick blog post on the subject. I popped into a few sites, watched even more YouTube/documentaries and learned quite a bit about coyotes. They are very present in Portland and in communities around the U.S.  The information here is much better ‘outta the mouths of the experts’ and each area has a link for your further perusal. (very enlightening)

Who Knew? Coyotes – Part of Portland Landscape was even a thing? I was surprised at how many sightings in many different areas of Portland there have been.

At the end of the day, awareness on this subject is important for all of us.

Perhaps the coyote season is soon behind us. Apparently, next week the sunshine is headed our way.

Paradise Restored Landscaping & Exterior Design of Portland, Oregon enjoys designing for all styles and size of properties. Visit our gallery of works: http://www.paradiserestored.com/portfolio/